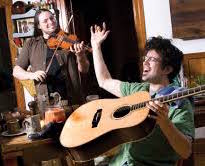 Melbourne is in the grip of Spring Fever. The return of warm weather – far too slowly this year! – the Aussie Rules Football Grand Final, the horse-racing carnival season… and the Quebec Fiddle Weekend! Now is the perfect time to introduce you to this year’s guest artists, Yann Falquet and Pascal Gemme. Part of the multi-award winning trio, Genticorum, and a duo in their own right, Pascal and Yann have been playing together for 18 years. With numerous other projects and collaborations always on the go, they are firm anchors of the trad music scene in Quebec. Pascal is returning to teach at the Quebec Fiddle Weekend after a highly successful 2015, and it’s a real privilege to also welcome Yann this year.

TradChat caught up with Pascal recently, and asked him to tell us a little about themselves.

How and when did you two meet?
Yann and I met at a house-warming party in Montreal in 1998. The band I was playing with at the time had just received payment for a whole gig in beers, so the refrigerator was stacked. Yann arrived fashionably late in the evening, and we jammed until early morning. We kept in contact and a few weeks later, Yann asked me if I wanted to start a jam session with him and a mutual friend in a pub in Montreal and I said yes.

Did you always have similar musical ideas or have you had to adapt to each other’s taste over time?
I think we have always had a taste for the same kind of music when it comes to folklore or traditional music. Many of our tastes in popular music also coincide. It was always an easy collaboration from my point-of-vue. I remember being much more controlling of Yann’s choice of chords at the beginning of our collaboration. He did not seem like he minded. Today I hardly say anything when it comes to chord progressions. Especially in the duet project where I wanted our musical personality to take the foreground.

Can you say a little about your current music projects?
We are currently working on a new album for our trio Genticorum. We have a new member in the band, his name is Nicholas Williams and he plays flute and accordion. He’s also a very good singer. We have a few numbers pretty much arranged now and I’m very excited about how it sounds.

Is Montreal a musically inspiring city?
I would say yes to that but I was never much into going out to hear pop music. On the folklore side of things, there are plenty of good weekly traditional sessions that one can attend. A few dances every month. A lot of good players live in Montreal.

Are you both die-hard trad music fans, or do you have alter-egos in different genres?
I like all kinds of music, I cannot think of a style that I totally dislike. Maybe electroacoustic stuff is more challenging for my ears. I love instrumental electronic music though…along with most everything else.

Is teaching the tunes you love as rewarding as performing them on stage?
A lot more rewarding for me to teach them. The more tunes I can show to people, the more chance I have to still be playing that tune years down the line. I forget tunes every day! A lot of times people remind me of tunes I’ve shown them and I can then relearn those melodies from them!

On your previous trips to Australia, did you manage to adapt to the Australian accent?!
Not being native English speakers (neither Yann nor me), I think we’re accustomed to not understanding all the little details and nuances. I would not say it’s a big challenge for us if you compare it to some accents in the Highlands of Scotland or to a Chinese person trying very hard to communicate with the few English words that he knows. When speaking to Australians…at least most of the time one of us masters the common language we are using to talk to each other :). 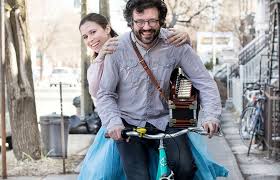