Ok, it’s true, 3 months is not a very long milestone to celebrate an anniversary!

But replacing a room full of players jamming together with an online platform where you can only hear one person at a time…  that doesn’t sound like a recipe for success!  Yet here we are, three months later, planning to continue indefinitely even as our live weekly jams at Box Hill Arts Centre prepare to start up again.

We are all becoming pretty familiar with the pros and cons of taking our lives online.  Celtic Jam Online has found more silver linings than expected over these past three months, and that’s the reason for this mini celebration.  Let me tell you about the good things!

From the first week online, our regular group was joined by players outside our local area.  It’s been exceptional to catch up with both familiar and new faces from different regions of Australia and even a few overseas.  Sort of like being at a much-anticipated music festival where you bump into players from everywhere. From a brilliant group of players in Gippsland*, (see note below) to several Adelaide Scottish Fiddlers, to players dotted around Queensland, remote South Australia, Tasmania, and also in Scotland, Scandinavia and the US – braving the very early time zone there to join in – and not forgetting those in or around Melbourne who just can’t make our regular Wednesday night Box Hill sessions.  Not being limited by physical distance is a big plus.

*Barry “Stuck” Stuckey from Gippsland is not only a great musician, but a mover and shaker in the folk world.  Since the covid restrictions, he has been compiling a newsletter, The Hum,   of online events happening around the country.  If you’d like to receive The Hum emails, contact Barry via the Gippsland Acoustic Music Club at gamc30@gmail.com

With no tyranny of distance, the  online platform is also a perfect vehicle for inviting guest musicians from time to time.  We’ve enjoyed an amazing array of musicians from Australia and overseas, teaching us tunes and a few tips on playing. Read on further to find out more about them.  We’ve been able to book these artists, thanks to players contributing small donations each week, which has grown to become a sizeable fund.  It’s been great to be able to do our part in supporting musicians during this crisis, as well as benefiting hugely from their teaching and playing.

It’s a new skill to teach music on zoom, as there’s no audible feedback from students, just silence and a few thumbs up (all being well!). The sound quality is not always reliable either, both definite disadvantages.  Despite this, we have learnt a huge number of tunes from each other.  Thanks to Chris, Linda, David, Owen, Barry, Leu, Mary, Fiona,  and Rachel for your teaching and playing these past months, and here’s to more tunes from everyone over the coming months.

Other great things about being online together:

Are there disadvantages in running a jam session online?  Yes, definitely.  As you can guess, we miss playing tunes together and being carried by that swell of music that jam sessions bring. We miss our regular members who have chosen to wait until the jams start up again in person. Jane, Mike, that’s you!  Moreover, not everyone has a good enough internet connection at home to be able to join the sessions regularly, as Julie will tell you.   Plus after a day at home working on the computer, it can be unappealing to spend even more time in the evening in the same room at the same computer.  As Fiona knows all too well. And of course, you can’t hold a proper conversation on zoom, where everyone can join in on top of everyone else.  This is normal human interaction, and we miss it!

We are going to celebrate our three month anniversary next week with a social night of trivia, BYO drinks and a few tune reviews.  In the coming weeks we’ll enjoy another round of new tunes from each other, and new guest artists in the spotlight.  Linda Rankin will be leading a Scottish session from her base in Fife, Scotland, and Quebec musician, Yann Falquet,  from the hugely popular trio, Genticorum, will introduce some button accordion tunes into the session for the first time.

Our Celtic Jam Online session is open to anyone, and takes place each Wednesday evening from 7:30pm – 9pm, Australian Eastern Standard Time.  Email me if you’d like to join in.
I’ll look forward to seeing you there!

Some info about our guest artists

Luke Plumb is a very popular Australian mandolin player, fiddler and composer.  He was an easy choice to kick off our zoom sessions.  As you can probably guess,  teaching on zoom takes some getting used to, as the only person you hear is yourself. Luke had never been on zoom before.  But it turns out he has a gift for teaching on the platform!  He started the lesson, playing and talking to us as though we were there in the room with him.  Zoom Jam had arrived!

Flute player Corinn Strating is a Melbourne local with a mesmerising style of playing.  The link over her name will take you  to an interview with her by the Blarney Pilgrim Podcast where you can hear her for yourself.  Corinn has grown up in a charismatic musical family – here’s to Strat and Lyndal! – and it’s no surprise that she and her twin sister have become leading players in the Australian Irish scene.  Corinn is also a top racing cyclist , a high achiever in many fields!  Look out for Corinn’s band, The Honeyfields, a trio with her equally-talented sister, Nicola and renowned fiddler Cat Moser.

In fact, most of our guest artists feature on the Blarney Pilgrims Podcast, so here’s a shout out to Darren and Dominic for all their work in bringing us this podcast.  It’s great listening!

Young guns, Emma Lewis and Cameron Hibbs (Tolka, Trioc) ran an Irish session for us one night, putting together some popular tune sets, and interspersing them with advice about sourdough bread.  Cheers Emma!  Em and Cam are lovely players and session-leaders, and will hopefully be back soon at the monthly Buck Mulligan’s session in Northcote (Melbourne).

There’s no doubt we were all highly entertained by our next guest, the one and only Kevin Crawford (Lunasa). Despite the severe lockdown he was coping with in a tiny apartment in New York City, he has lost none of his wit and humour.  Or his considerable skill in playing and teaching.  And we appreciated it all even more when we found out he was up at 4am in order to join us in Australia across the great time divide.  Kevin Crawford is a joy to have in your lounge room!  And one day it will be great to welcome him back in the country…

Another local musician who we were lucky to catch was Khalida de Ridder. Khalida would have been touring overseas, but covid saw her return to Australia instead.  Khalida is possibly one of our hidden trad-musician treasures!  She grew up in a folk-musician family in Far North Queensland, and won an incredible array of awards at a young age, including the Junior Australasian Fleadh Fiddle Champion (2003), the Golden Fiddle award (2010), the Chris Wendt award (2006) and the Declan Affley award (2009).  After spending years furthering her musical path in Europe, Khalida is once more based in Australia, so we’ll hopefully catch her many more times in the future.  Khalida’s artistry on the violin, and early immersion in Irish music makes her an invaluable teacher and performer here.

Another artist who could be called a hidden treasure is Robert Zielinski, musician and luthier based in the beautiful but remote town of Albany, Western Australia. Rob is a very encouraging teacher and an incredibly evocative player. Rob has well and truly been caught up in the Covid spin, as he was touring in New Zealand when the borders closed almost overnight.  As a result, Rob has been stuck in New Zealand since March, with no way to come home until flights resume in July. While in NZ, he has composed a new work, recorded it and tis now  touring it!  The silver lining for Rob is that NZ has opened up before nearly all other countries, so he and NZ flute player Rennie Pearson have been able to play at live gigs.  If you’re in NZ, look out for them!  Details on their facebook page, Ren and Rob.

One of our regular members is Australian fiddler and composer,  Linda Rankin. Linda has Scottish heritage, and finally had the chance to spend some time in Scotland this year…. which means Linda has been spending the bulk of her time in Scotland so far in confinement!  The positive outcome from this – among the many negatives! – is that Linda has been able to devote more time to the fiddle than ever before, and we are lucky to benefit regularly from her playing and teaching.  Cheers Linda, it’s been great to be able to catch up with you each week and enjoy your playing!

Our most recent guest artist was Robin LeBlanc from New Brunswick, Canada. Robin managed to make the zoom online platform into a 3 dimensional experience! He succeeded in  teaching us an Acadian fiddle melody, accompaniment and stepdance, all in one night..  OK, probably none of us actually learnt the stepdance, but the opportunity was there! Robin is a fiddler, dancer, composer and tune-archiver in his native region of Bathhurst, New Brunswick. In his words, New Brunswick is a poor, often forgotten province, and this is what makes a culture very rich.  Robin devotes a considerable amount of time in researching and recording the tunes of his neighbours, past and present, and is a leading archivist of the deep-rooted Acadian fiddle tradition.  The Acadians, originally from France in the 17th century, were given a bad deal when the British won the Canadian colonies, and were mostly exiled to the southern states of the US, becoming the Cajun people.  Those who were left in Canada suffered poverty and prejudice.  Now the tables have turned and the Acadians are teaching us skills from their incredible musical heritage.  Robin and his wife are raising three very musical, talented daughters who are part of a family band, and also run a nearly self-sufficient farm.  If Robin and his family manage to tour in Australia post-covid, I’ll definitely let you know!

Especially for the Zoom Jam attendees…

Here’s a run-down of the tunes we’ve covered these last 3 months.  Have at glance, because it might come in useful for next Wednesday’s Quiz Night!!

Chris Morphett:  Arrane Ny Nie, Lucy Farr’s Barndance,  Arrane ny nie means “The washing song” and is from the Isle of Mann.  It is very similar in melody to the Eagle’s Whistle!

Kevin Crawford: Last Night’s Fun, slipjig.  Not to be confused with the reel of the same name!

Mary Anderson:  The Doon, Scottish reel about a river in SW Scotland. 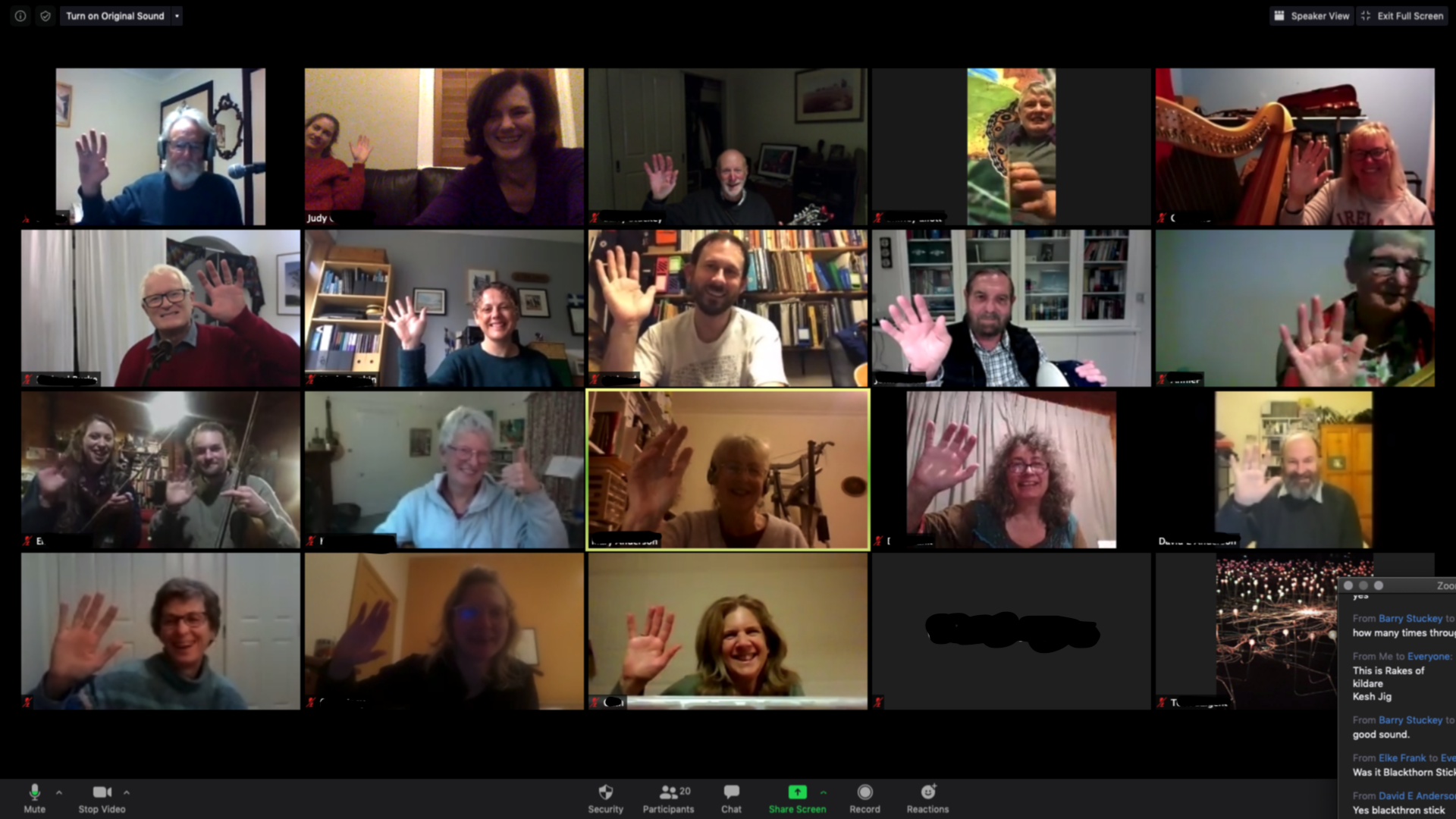