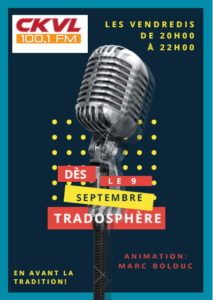 This is the customary opening phrase to a favourite radio programme of mine, Tradosphère. Host Marc Bolduc gives a sparkling introduction to his co-host, Christiane Campagna. As radio announcers, they form a dynamic team to entertain and educate their listeners in the traditional music of (mainly) Québec. It’s a great way for someone outside of Québec to stay up-to-date with what’s happening. The show is in French, but if you don’t understand French you can still enjoy the music. It’s also a great way to improve your Québecois French!

Annonce CKVL 2I asked Marc to tell us a little about the show, and was very sad to hear that the station CIBL will end all specialist programmes, including Tradosphère, in September. So enjoy it while you can!

Update: Good news!
A month after the sad announcement of finishing with CIBL, Tradosphère has found a new home on CKVL on Friday nights from September 9, 2016. You can listen at https://soundcloud.com/marc-bolduc/tracks

Tradosphère has just celebrated its 12th anniversary. Congratulations! Have you been involved with the program from the start?
I’ve been associated with Tradosphere since the beginning in 2004. The founder of the program, Jocelyn Thouin, needed some “expertise” since he was a newbie on the scene. My wife, the fiddler Laura Risk, was interviewed by Jocelyn during (the festival) La Grande Rencontre in 2004 and she told him to contact me about a collaboration. I helped him for an interview with fiddlers Jean-Marie Verret and Yvon Mimeault and it went so well that Tradosphère was led by two people. In the end of the first year Christiane started to do some segments on the program and became a regular collaborator to the program. When Jocelyn left in 2008, she became co-producer of Tradosphère.

It became, for me, an ideal situation, since I always loved folk music and dreamed from a  young age of working in the media

I haven’t been to your studios, but it sounds like you have a window looking from the street right in to where you’re recording, allowing people passing to see you. Is it distracting? Do you have a regular audience?
As for the location of our studios, they are on the corner of St-Laurent and Ste-Catherine, two major streets in Montreal’s downtown. Also, CIBL is near the Place des Festivals, which means there is a  lot of people passing by. They are not really a distraction, but sometimes people are tapping on the windows, taking pictures (especially when we have guests), and dancing in the street since they can hear on the sidewalk what’s going on in our studio…

Which countries listen to your program or podcast?
As far as podcasts are concerned, I don’t have any data about where we can be downloaded. But from comments coming from the audience, I know we have people listening to us everywhere in Québec, but also in the United States, in France, Scotland and in Australia! It’s always surprising and curious to know that someone so far away would get interested in a genre so “local”.

For those who don’t know Québecois music, what artists or groups would you recommend listening to?
It’s really tough to recommend a group or an artist in particular because there are so many styles and different interpretations that make  Quebec folkore great.  It would be unfair to direct the public toward someone.  The Tradosphere is large and the interest of people varies so I would just recommend to listen to it all and then, make your own mind about what you love.

You can hear the archived programmes at:
https://www.cibl1015.com/tradosphere