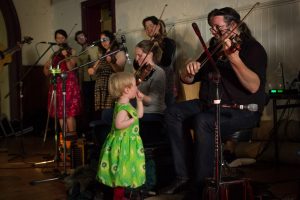 “What I love about social dance is seeing a roomful of people in sync, the dancers and the musicians. There’s just nothing better, that buzz of live music and everyone responding to it”

Contra dance… que’est-ce-que c’est? For those of us who’ve never dipped a heel or toe into this aspect of the folk or social dance scene, a quick spot of online research explains contra dancing as ‘social interaction, meeting people, and making new friends, set to music.’ A hot stepping cousin of square dancing or bush dancing, contra dancing is done in pairs with couples moving up and down a line or in sets in response to a caller. It originates from North America and is steadily gaining an enthusiastic following of new, young dancers here in Australia. It is also a fantastic way to link social dancing with community music making.

Melbourne based musician, Judy Oleinikov is a big fan of the inclusive nature of contra dance and for the past three years or so has been doing her bit to bring a wider awareness of it to musicians and dancers alike: “ Contra dances can be more vivacious and also a little bit more informal than some of the other dances we have here… unlike something more structured such as Scottish Dancing, it isn’t intimidating to beginners.”

It may be a relief to hear that a sleek technique isn’t required and you don’t need to point your toes to take part. Contra dancing is open to anyone of any age and people seem to find it highly addictive due to its inherent element of fun. That and the amount of spinning involved.

For Judy, Contra dance kicks come from her involvement as a fiddle player for the dance:

“What I love about social dance is seeing a roomful of people in sync, the dancers and the musicians. There’s just nothing better, that buzz of live music and everyone responding to it.”

In addition to the fact it’s fun, Judy considers the resurgence in contra dancing important in helping to sustain a complex skill and a vital element of musicality which she believes is at risk of becoming lost: the ability to play for dancers.

“A lot of Celtic musicians learn the music completely separate from the dance and so they haven’t quite got the feel… they can be brilliant players but to a dancer it just wouldn’t be right. We’ve grown used to hearing recordings or playing tunes in pubs and so what I really like about bringing a dance back is doing it while people are learning the music to go with it.”

The 2018 QuasiTrad Contradance will donate all proceeds to Community Music Victoria, a not-for-profit organisation that works tirelessly to promote community music-making across Victoria. 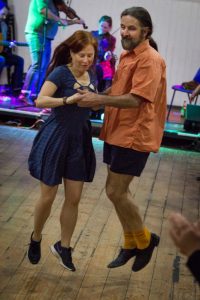 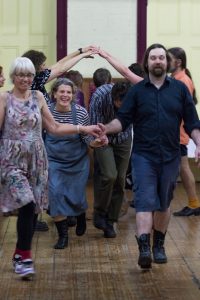 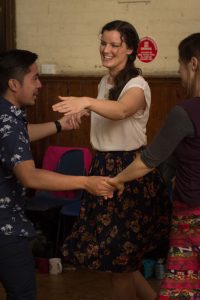 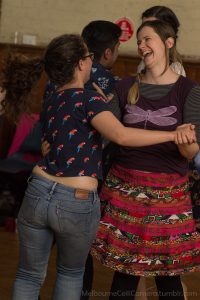