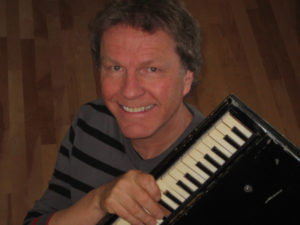 Folklore survives when it’s multi-generational. Folklore dies when it ignores the young. And it’s impossible to have a living tradition without the presence of the older generation!

These are the words of Mario Loiselle, who has been part of the traditional music world in Quebec for most of his life. Known especially for his piano accompaniment style, Mario has been sharing his love and knowledge of the music for decades. I first met Mario when we were fiddle students together at the Montreal School of Traditional Arts. Well, we were actually in different countries at the time and I was only able to enrol in the course because he agreed to take on the weekly task of emailing me the audio files from the course! I was lucky enough to hear some of his stories through our regular email contact, and I am delighted to now bring you this interview. Mario is articulate and astute in his observations, and is only too happy to share his love of music and piano accompaniment with other like-minded souls.

So sit back and enjoy his stories for yourself!

You are a self-taught pianist – what was your motivation and how did you learn?
Yes, I am a self-taught pianist. I was born in 1953 into a modest family in a suburb of Montreal. My parents loved listening to the folk music of the time that was on television: Don Messer, Chez Isidore et Soirées Canadiennes. We had some records, especially of the Soucy Family.

There was a piano at home. When I was 8 my parents paid for me to have lessons, but I hardly practised. I used to listen to the teacher and replay by ear everything he wanted me to learn. But I did tinker a lot and around 14 I started playing the pop music of the 1960s by ear. I was attracted to “modern” music, but despite this, never lost contact with folk music.

At 19 I went to the First Festival of Quebecois Traditional Music where I heard Louis Pitou Boudreault and Antonio Bazinet for the first time. It was then that I really “connected” with the trad music of Quebec.

I was especially drawn to the violin. I bought myself one and started playing, obviously by ear. I formed a dance band called La Bardasse. We had a dance caller as part of the band and we would play for popular festivals. It was then that we met Philippe Bruneau, an accordionist who was very important in the resurgence of Quebecois folk music. He must have been about 45 then and we were 20. He passed on his passion to us, as well as his philosophy and approach. It was a privilege to be around him. Philippe had the skills, knowledge and experience of how to accompany the music on piano, and it was at that time that I decided to switch to piano accompaniment. 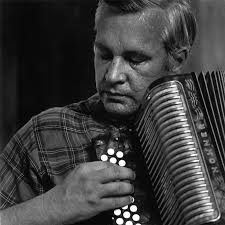 Have you had any mentors or musical heroes over the decades?
Obviously Philippe Bruneau, he was my way forward with accompaniment! I went to visit him many times. I would sit down at the piano and he with his accordion, and he would begin a tune. At a given moment he would stop and take a seat at the piano to show me the basics and the chord progressions, and to improve my technique and tone. Later on I accompanied him several times when he played for dances. That was always a rewarding experience.

But the pianist who has influenced me the most is Dorothée Hogan, who played with Philippe Bruneau in the 1980s. She was classically trained. Philippe harmonised and arranged the chosen repertoire, and Dorothée wrote it all down and so could reproduce the same arrangement at each concert. At this time, in 1980, I was involved in the recording of their concert at the Museum of Fine Arts in Montreal. I had in front of me two tracks that had been recorded, one with accordion, the other with piano. I could listen to the piano track separately and study the arrangement and harmonic progression. Then I could listen to the accordion track and add my accompaniment. And ever since this recording, I have learnt the fundamentals of piano accompaniment!

You are a popular teacher at fiddle camps in Canada and the US. How do you teach students to accompany in the quebecois style?

To accompany, my left hand plays the role of a double bass and plays the downbeat of each bar with the root, third or fifth of the chosen chord. This note is a single note, not played in octaves, generally played with the little finger, the thumb or another finger. I don’t play an octave in my left hand until I’ve produced a full-bodied sound with the bass. When you play in octaves, you ruin the effect of a double-bass by making the sound too sharp. You can use a walking bass and other effects. You need to use variations and avoid repetitive passages.

The right hand, though, plays the role of a guitar and adds the up-beat. You need to place right-hand chords in the “sweet spot” of the piano, not too high where they’ll compete with the melody, and not too low where the sound is less defined. The sweet spot is between F, just below middle C and G, above middle C. To give you an example, I play D major using A below middle C, and D and F# above middle C. 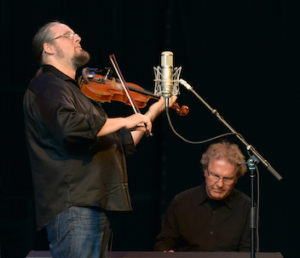 Over the years I must have developed my own personal style. I could say that I use a simple style where I give each melody their own colour. I try to vary the harmonic progression and rhythm each time a motif is repeated, and I create unexpected variations. That’s a huge challenge to undertake each time!

As well, I often use a tenor counterpoint melody that unfolds with the down beat of each bar. It’s played by the right hand thumb, index or middle finger, played lower than the melody. It’s a small melody or motif that adds another voice in a certain space on the piano, while following the rhythm of the left hand.

Have you always had a passion for the trad music of Quebec?
Yes, you can say that. I have had some times where I haven’t played much, and those periods have made me realise how much I like playing piano accompaniment. When I find myself in jam sessions full of musicians, I am energised. I also love playing for dances, it’s fascinating to see people moving to the sound of our music. I play to children in schools. I love doing concerts. You can play Quebecois music everywhere. When I play, I go into a state of mind where nothing else matters except the music that I’m accompanying. That’s definitely a passion!

Can you tell us a little about the resurgence of folk music in Quebec in the 1970s?
I have a feeling, in spite of everything, that each generation which has come before us has successfully passed on the music, songs and dances to the next generation. We tend to think, probably incorrectly, that there was a big gap [in folk music] in the 1960s. But the gap was probably more imagined than real.

The young generation in the 1970s – we thought that we were the generation of a truly new beginning. That Time had been reset to zero. But what we didn’t know was that everything had been left in place: there were already active musicians, there was dancing in the villages, music collecting and archiving had already taken place, musicians of importance had made recordings. In short, you only had to look around to see that everything was there. There had been no break.

As for me, I lived in the city and hardly knew anything about this world of traditional music. The turning point came at the beginning of 1973 with the Festivals of Traditional Music organised by André Gladu at the University of Quebec in Montreal. That’s where I heard authentic music for the first time. It was also the springboard for the young bands, La Bottine Souriante and Le Rêve du Diable. But the older players were still part of the movement (Louis Pitou Boudreault, Jos Bouchard, Philippe Bruneau), and the generations intermingled. So you could say that the 1970s succeeded in sparking the interest of its youth in trad music. It created an inclusive movement where the older players were still active participants and the younger ones were able to express their creativity. Folklore survives when it’s multi-generational. Folklore dies when it ignores the young. And it’s impossible to have a living tradition without the presence of the older generation!

For any readers who are new to Quebecois music, who do you recommend to listen to?
That’s a big question. I could put forward 100 albums, but I’ll suggest…4! 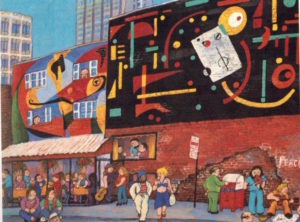 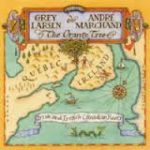 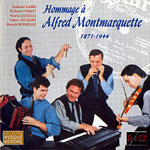 Voilà!
Hopefully I’ve helped you to appreciate the traditional music of Quebec and its piano accompaniment.