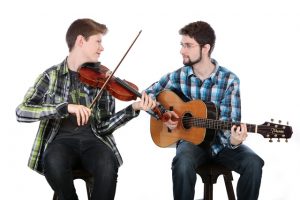 Having a brother who shares your taste in music is fortunate. And having a brother to actually make that music with is even better! The Belanger Brothers both started playing classical violin at the age of 6, and then both became devotees of traditional music, leaving behind a promising classical path. Tommy, now 21, moved to guitar, while Jordan, 16, stayed with fiddle, and the sibling duo was created. In recent years, they have won numerous awards including the Young Tradition Contest in Vermont, US, played at numerous folk festivals in Canada and abroad, released their first CD, Unis dans la tradition (United in the Tradition) and Jordan was even selected from dozens of young musicians across Canada to take part in the TV series, Virtuose.

TradChat recently talked to Les Frères Bélanger to find out a little more about them, and their combined passion for trad music.

It sounds like you’ve had a very busy and successful 2016 with performing, teaching and even starring on TV!
What have been some of the highlights of this year for each of you?
Being part of the program at the Festival Mémoire et Racines, the biggest festival of trad music in Quebec. We also were the support band for the group, De Temps Antan in Vermont (US). For me (Jordan), participating in the show Virtuose was a huge experience this year, as well as a 10-day concert tour in Ireland with 19 other young players from Young Tradition, Vermont.

Congratulations on the success of your first album, Unis dans la tradition. Had you been thinking of making this CD for a while?
In all honesty, we really decided it that same year, in 2015, even though we had been playing already for quite some time together, both for pleasure and at gigs.

Was it natural for you to start playing as a duo or did it take a while to be in sync with each other?
We began playing together at a very young age, when we were both playing violin, so the bond was already there when my brother took up guitar as his main instrument.

A duo is quite a different experience to playing in larger bands, more exposed, but perhaps with more creative freedom. Is this format something you both prefer to playing in larger groups?
We enjoy playing more as a duo. It’s much easier to harmonise together, it all comes together easily and as soon as one of us gets an idea, we can try it out!

Can you tell us a little about your musical background and how you have become so immersed in Quebecois trad music?
Tommy: I started playing classical violin at the age of 6, then in 2008, at a trad fiddle workshop given by André Brunet, I started playing traditional music. Then I gradually migrated to the guitar, because I really like doing harmonies and I found the guitar better than the violin for accompanying my brother, who only played violin at that time.

Jordan: I also began playing classical violin at the age of 6, then at the same André Brunet workshop in 2008, which my mother had organised I began playing trad music. I still continued my classical studies for 9 more years. Then, a year or 2 ago, I stopped classical musical to concentrate solely on traditional music, because that’s the music I prefer.

Do you come from a long line of musicians?
Yes and no. The only real musicians in the family were two or three uncles, but we know that during my parents’ time, there was lots of singing and guitar-playing. On the other hand, there were no fiddlers except for our grandfather on Dad’s side. He played a fiddle, just with 3 fingers, on a broken instrument that he found in the rubbish which he repaired himself, Mesdames et Messieurs! Basically, we have been listening to this music since we were very young, and have been going to festivals, jam sessions and workshops. For the past 8 years, our mother, also a fiddle player, has been organising twice-yearly workshops (Les Ateliers d’Annie) with professional musicians, so we’ve had the chance to mix with many people in this way, who, over time, have become our friends.

Who are your musical influences?
On fiddle, we really admire André Brunet and Stéphanie Lépine, and on guitar Éric Beaudry. There are many groups who influence us and who we appreciate – De Temps Antan, Le Vent Du Nord, Ni Sarpe Ni Branche, Hommage Aux Aînés, Etc…

What else do you both enjoy doing, when you’re not playing music?
We like computers and gaming, and we play together or separately. As for me (Jordan), I love playing tennis and badminton, and running.

Do you have anything else you’d like to add?
We would never have thought that our album would end up so far away across the world! Thank you for listening to us, and for introducing us. We hope you like our music!