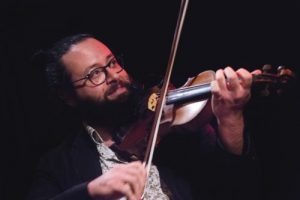 “At around 16 years old… I was listening to a CD at a music store… that is the moment where I felt like I entered a world that I didn’t know anything about but that was pulling me towards itself.”

If tradition is defined as “knowledge, innovation and practice” (UNESCO Institute for Statistics, 2007), then David Boulanger is a key tradition-bearer for Quebecois music. From a young age he immersed himself in the music he heard around him from older players and recordings. His own musical expression developed over the years as a fiddler in many different bands, notably La Bottine Souriante who celebrated their 40th anniversary last year, and he has drawn on these influences and recast them to be as appealing today as decades ago. David is the guest fiddler for the 2017 Quebec Fiddle Weekend, and it’s a pleasure to be able to share some of his knowledge and passion for the music. We couldn’t wait until November to find out more about him, so we contacted him recently in Quebec for a short interview.

You are a great ambassador for Quebecois fiddle. Has it always been your passion?
The passion for the traditional music struck me at around 16 years old, when I started playing this style. I had been playing the violin since the age of eight. I remember vigorously where I was when I opened the door for this passion that created a void that needed to be filled up : I was listening to a Cd at a music store before buying it. It was Louis « Pitou » Boudreault. The album started by a long monologue where Mr Boudreault was explaining how the music took place in his family, on a party night. That is the moment where I felt like I entered a world that I didn’t know anything about but that was pulling me towards itself.

Are you from a family of fiddlers or musicians?
Unfortunately, I am not. I would have liked to be able to pass along the tradition that I could have learnt in my family, like it so often happened in the old days. Instead, the people I have learned from, whether they passed away or are still alive, are my musical family and I have a strong feeling of respect in what I learned from them.

Can you tell us about your musical path – about the bands you’ve been in and are in, your compositions, some memorable times you’ve had…
Wow, that is a big question. I started playing the violin when I was eight years old in an intensive music program at school. I did this until college where I started my music education in jazz studies. I did jazz violon studies and jazz composition and arrangements studies. At age sixteen, I started to play guitar in a folk music band in my high school. After quitting the band, I started to learn on the violin the melodies I was accompanying on the guitar. During the same time, at around eighteen, at the same time as I was discovering old recordings of fiddlers, I started to research for events where I could go see traditional music events. I discovered more than that : session nights, folk dances, festivals, etc. That is when I also started to play with my first professional folk music band, La Part du Quêteux, with which I recorded 2 albums. In 2007, I joined the iconic band « La Bottine Souriante ». Of course, this band has brought a lot of deep emotions throughout the years : I did my first gig and trip in Europe with them, I recorded and album with them, I got to play with some of the finest musicians that I know, I learned a lot about touring, I got the chance to play tunes that inspired me to play that style, etc. In 2010, I had the chance to arrange and record a album with Jean Duval, a great ethnomusicologist and flute player. The idea was to dig deep to find unusual tunes from the Québec traditional repertoire. Later on, I started to play with Maja Kjær Jacobsen from Denmark in a fiddle duo called « Maja & David ». For 5 years, we did a mix of Québec and Danish traditional music and a lot of our compositions. We also recorded two albums and toured many countries. The most recent news is that I just finished recording a new album with De Temps Antan, a great Québec trio, that will be released in November and that is also when I will be joining the already existing group.

Who are your musical inspirations?
In terms of folk music, the great old guys are my primary source of inspiration : Louis « Pitou » Boudreault, Aimé Gagnon, André Alain, Yvon Mimeault, Édouard « Ti-Douard » Richard, Jos Bouchard and so many more. I also get inspired by other great players that have played (or still play) other instruments like accordion, harmonica, etc. I think that the inspiration, when it comes from a context other than from an instrument, has a better understanding of the origin and the purpose of a traditional music. For example, folk music in Québec had the purpose of accompanying folk dances. Therefore, I feel like I should learn and as play as much as possible in that context and with other great musicians that master that context to be in a position when I start understanding Québec folk music.

Are you surprised that your “local” fiddle style has been so embraced by players around the world?
I am first and foremost happy that it turned out this way. With great bands like La Bottine Souriante, Le Vent du Nord, De Temps Antan and many more in addition to great players who have toured the world since 30-40 years, I think that it was only a matter of time to reach the interest of other countries’ musicians. After all, many Québec musicians and music enthusiasts have embraced the music from other cultures. To me, somehow, and in a humble way, I feel like it makes sense, and I am happy and grateful that Québec’s music is where it is positioned in the world and that it has given me the chance to travel and share our music.

We are very much looking forward to learning a quebecois dance from you during the Quebec Fiddle Weekend. I think this is a premiere for Australia! How did you learn to play and call a dance at the same time?!
Music Darwinism : I was at Miles of Music camp, co-founded by Laura Cortese. Laura came to me and asked me if I could call one night so we could turn the evening theme into a Quebec dance night. For those of you who know my dear friend Laura, you will not be surprised to know that her question didn’t really have a question mark at the end! So I started to write on a piece of paper some moves that I remembered dancing and making up a bunch of dances for that night. Since I am first and foremost a fiddler, I kinda had to play the fiddle to help with the repertoire that was being played (I like Quebec dances to have Quebec tunes … makes sense, no?). And there you go, now I can call and play. I wouldn’t call myself a « caller » though. There are people who have dedicated their career to this art and I have so much respect for them!

What are your current musical projects?
I am actually in between projects. Maja & David recently ended a long but fulfilled musical journey to focus on new endeavours. Meanwhile, in November, I will release an new album with De Temps Antan, a power trio that I’ll be joining officially on the night of the album launch. I still play with La Bottine Souriante and I am also working on the repertoire of « SOLO », the new show that De Temps Antan and Le Vent du Nord are performing together.

Apart from music, do you have other passions?
FOOD!!!!!!!!!! Everything involving food, food culture, beverages, etc. So you can imagine that I have been looking forward to visit Australia with its great food and wine culture. I have been reading blogs and books about it. Food is actually the first thing that pops into my mind when I know that I’ll be going somewhere to perform, especially if I have never been to that place.

Have you set a Guinness World Record for the longest beard?
Of course, 5 times in a row. I am also starting a new career : a local organic farm that provides hair for bows. Still working on the branding though. Any ideas?

Do you have anything else to add?
In these time I can only think of wishing Love and Peace to you all.